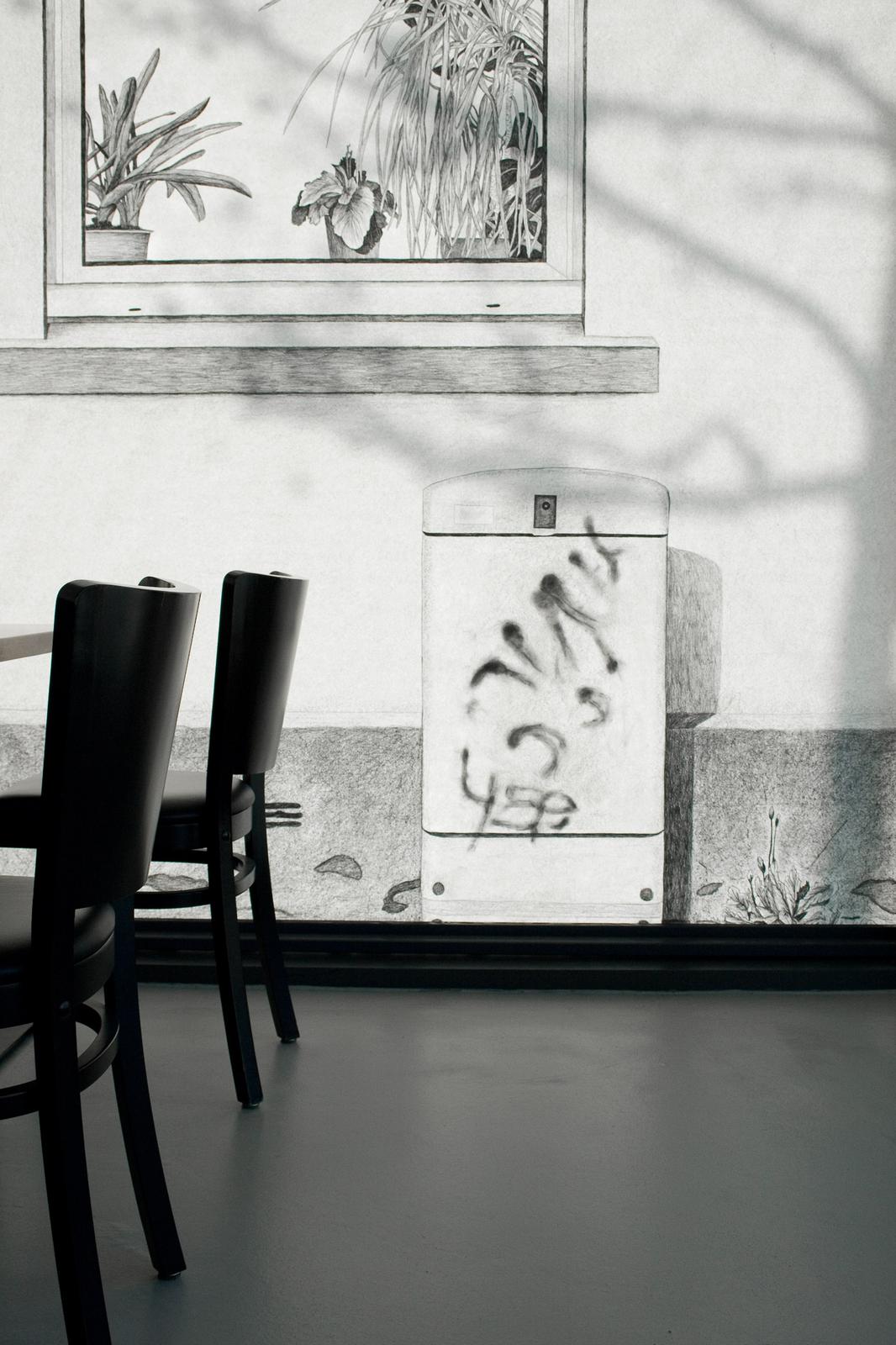 Inside views of an outdoor installation:
Sascha Winter about Adriane Wachholz

The borderlines between inside and outside, inclusion and exclusion, reality and illusion are the boundaries along which Adriane Wachholz’s new installation happy house operates in her artistic exploration of the notions of “home” and “belonging”. This approach is already physically evident in its mediality and presentation, for this intermerging outdoor and indoor installation comprising a video projection and graphite drawings on paper is located at the southern glass frontage of the pavilion, this being the entrance and café area linking the long and wide Rheinuferpromenade on the outside with the underground exhibition room of the KIT on the inside. Thus this site-specific installation attracts the attention not only of the visitors of the group exhibition Happy House oder Kleine Reparatur der Welt but also that of the casual strollers on the riverbank. We, the viewers, are first of all confronted by the plain, slightly shabby front of a house with two bare windows, with weeds gradually growing up its wall. Standing in front of the house are a mains box sprayed with graffiti and a solitary plane tree that extends the row of plane trees that flank Düsseldorf’s Rheinallee.

Visible in the two windows are a few indoor plants, a candlestick figurine and an orchid. Evidently Düsseldorf’s prestigious Mannesmannufer, with its mighty buildings of government and commerce, has witnessed the intrusion of drab suburbia into the modern steel-and-glass structure of the KIT Pavilion. Occasionally we can make out the shadows of people behind the two windows. But it is not until the evening twilight that the new inhabitants and the little house itself really come alive. In the room on the left we can now distinguish the colourful reflections of a disco glitter ball and the shadow of somebody evidently enjoying a party of music and dance. In the room on the right, on the other hand, the prevailing atmosphere seems to be much more cosy, though what seems to be a magical phenomenon on the windowsill catches our eye more than anything else: while the curtains and the meanwhile lighted candle occasionally flap and flicker in the evening breeze, a white, silhouette- like cat playfully prances to and fro and the orchid presents a strange, firework-like display of colour. In the meantime, in front of the house, a young woman – no doubt a chance passer-by – has been so inspired by the dance music emanating from the inside of the house that she is dancing around the plane tree. Somewhat irritated by what we see, we – the hitherto passive observers of the scenario – allow our voyeuristic curiosity to get the better of us and move a little closer in order to take a better look at the house and its inhabitants.

On closer scrutiny, however, the front of the house turns out to be made of large-format webs of paper tightly stretched behind the greenish panes of the glass-and-metal structure of the KIT Pavilion. The entire façade of the house and its architectural features, the room decorations visible through the windows and even the mains box outside the house, the plane tree and the weeds growing up the wall now dissolve into fine, painstakingly drawn pencil lines. The evening illumination, the shadows and the moving figures, even the dancing passer-by, now turn out to be projections of video-generated images. Although we are also entering the inside of the house, so to speak, as we step inside the KIT Pavilion, we are still gazing at its reflected outer façade, and yet we now realize that we, in turn, have become the silhouettes behind the windows for those people still standing outside and, by the same token, are now the new inhabitants or guests of what was but a few moments ago a house that was still strange and unknown to us. Thus we have inevitably become “border crossers” between outside and inside, between exclusion and inclusion, between illusion and reality. Questions soon pose themselves and thought processes begin to revolve around our own notions of “home” and “belonging”, around our positions as individuals in society, around the significance of our own small worlds in the global context, but we soon realize that there are no clear-cut answers or categorical definitions. Due to the all too frequent demands for flexibility and mobility, such traditional parameters as place of birth, parental home, family, friends and workplace have for many people long since ceased to be fixed constants but rather forever shifting coordinates – mostly shifting away from one another than towards – in a unstable system. It is for this reason, perhaps, that such notions as “home” and “belonging” must be understood rather as ideal places of memory that elude material reality, so to speak, and operate – as in the works of Adriane Wachholz – above all in our imagination through our own personal biographical histories and the stories, emotions, wishes and dreams that we associate with them.